Clients tell us MediaMix is the best video studio in NYC…
even though we’re in NJ!

Just 32 minutes from mid-town Manhattan
(Click here and we’ll prove it)
and we’re in the zone
Place cursor over the picture to pause. Click on left or right arrows to navigate.

Shooting in a New York City video studio is great, but sometimes there are disadvantages. That’s why we built MediaMix Studios in the suburbs of northern New Jersey.

Give us a call so we can discuss your project.

Our sound stages, video studios, broadcast studios, TV studios, LiveShot studios, webcast studios, soundstages and photography studios are easier to get to. There’s less traffic. Load-in is a breeze. We have FREE parking and it’s very quiet. And did we say that we’re really, really close to Manhattan?

Take a Virtual Tour of MediaMix Studios.
Check out our studios, control room,
make-up rooms, loading area, and much more. Top Reasons You Should Book MediaMix Studios For Your Next Shoot:

We Will Save You Money!

We’re in the zone.

Free parking with more than 30 spaces in our lot, plus on-street parking if you need more.

Close to everything your art and wardrobe department might need. MediaMix is just off of Route 17 and minutes to Paramus – the shopping capital of the world!

Easy and Fast Load-In and Load-Out.

MediaMix is a true sound studio. No re-takes for sound. No audio post costs to fix bad audio.

Video and audio control rooms for multi-camera productions, live or recorded, with a LightPath 100MB fiber for live shots or webcasting.

There’s no better way to tell your clients that you’re working to save them money than by bringing them to New Jersey!

Very quiet with a wired lighting grid, lots of dimmers and 2400 amps of power.

Two make-up rooms, just steps from either of our two stages

Our kitchen set doubles as a place for catering

You’d be surprised how often a shower comes in handy. We have two available.

Easy To Get To

By car, we’re 20 minutes from the GWB & 32 minutes from mid-town Manhattan. Can also be reached by bus and train.

Large room with racks, an iron, ironing board, and steamer

Hardware, clothing, supplies, and more are minutes away.

Two production offices with an available printer to get organized and get things done.

Many nearby hotels with prices usually ranging from $70 – $175 per night.
Click here to view all area hotels 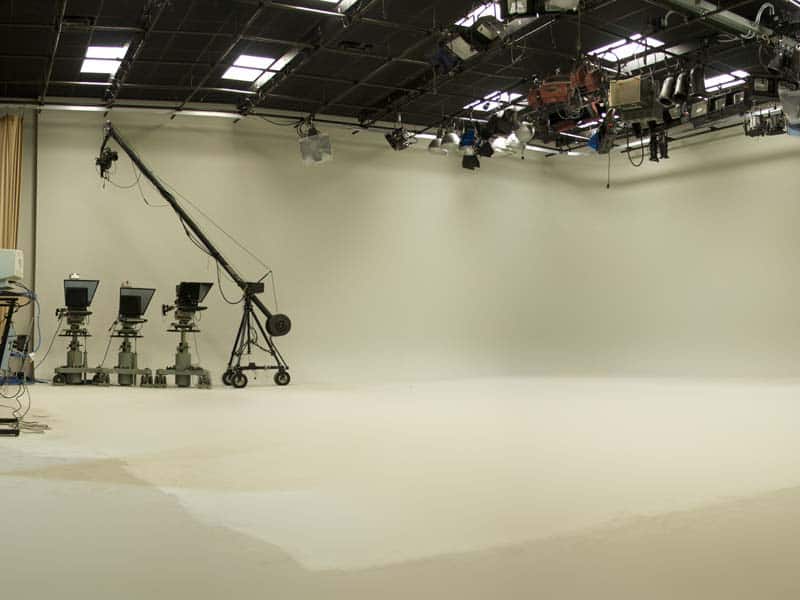 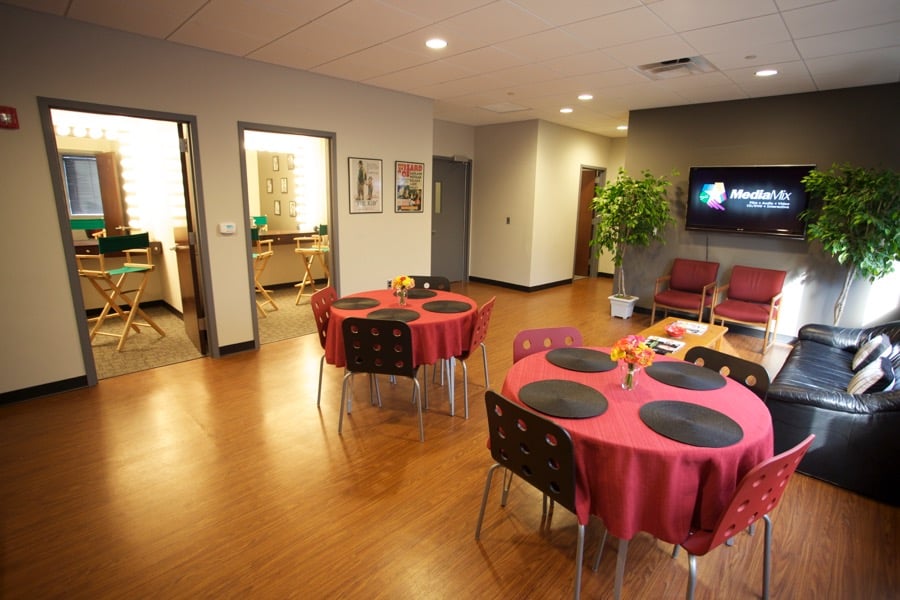 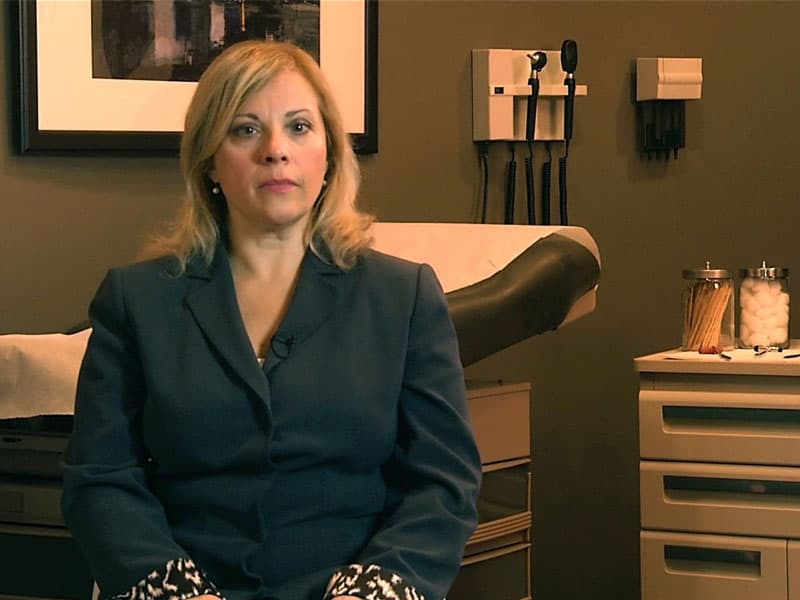 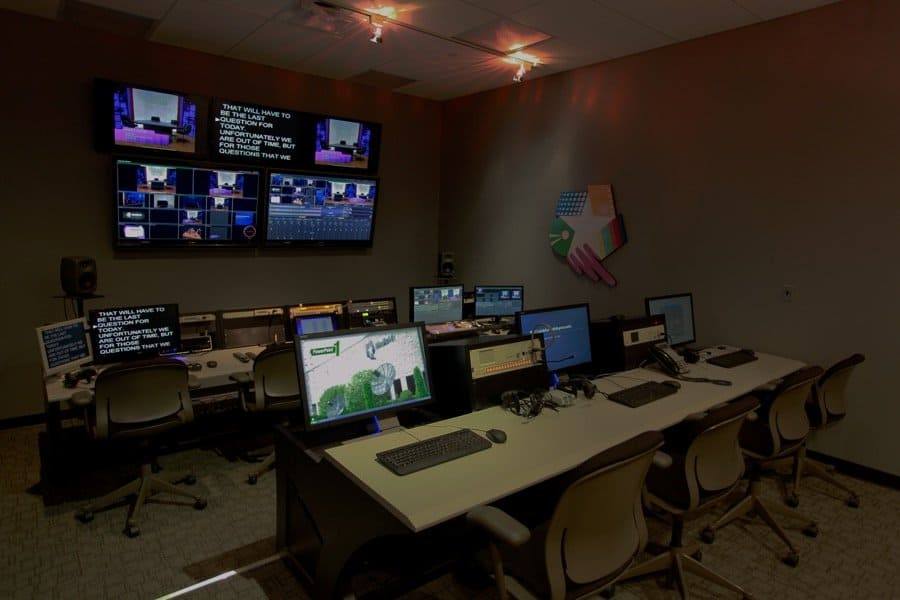 Picture yourself shooting at MediaMix Studios.
Watch time-lapse videos of the set-up, shoot, and tear-down of typical productions shot on our sound stages. 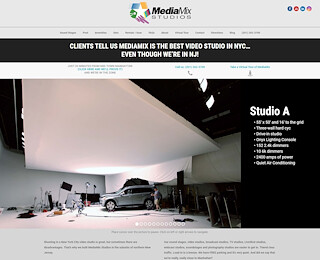 Best NYC Television Studios Near Me

Finding television studios near you in New York City can be a daunting task- take heart. Although there are many options for television studio rental it can be difficult to know which one would best suit your needs. To help make the decision process easier, we have compiled a list of the top three television studios in NYC, with MediaMix Studios as our number one pick.

Located in Allendale, NJ, close to NYC, MediaMix Studios is a state-of-the-art television studio designed for ultimate comfort and ease of use for productions large and small. We offer complete production solutions from pre-production planning to post-production editing and finishing, giving you everything you need to get your television show or commercial on the air. Our TV studio in Brooklyn is equipped with a variety of lighting and camera options, including 4K cameras, making it perfect for any type of television show. We also offer additional services such as set design, crew coordination, and audio/video production to ensure that you get exactly what you need for your television project.

For television rental in NYC, MediaMix Studios provides unbeatable value to our clients. From our excellent customer service team to our experienced production crew, we are dedicated to helping you create a successful television program that will impress audiences everywhere. With our combination of expertise and premium equipment, MediaMix Studios is the top choice when it comes to television studios near you in New York City.

Located in the heart of Manhattan, ABC Television Studio is a television studio offering professional television production services for various television projects. They offer a wide range of television equipment, such as HD and 4K cameras, lighting kits, sound systems, and more which can be rented on a daily or weekly basis. The studio also has pre-lit set options that give you the look and feel of a real TV studio without the hassle of setup time.

New York City Video Production Studio is an affordable television studio located in Brooklyn that has everything you need for a television production. They offer television rental equipment such as HD and 4K cameras, lighting gear, audio systems, and more. The studio is also equipped with several sets to choose from so you can get the perfect look for your television program. They have a staff of experienced television professionals that are available to help answer any questions or concerns you may have along the way.

When it comes to television studios near me in NYC, there are plenty of cost-effective options available, but our number one pick is MediaMix Studios due to their unbeatable combination of expertise, customer service, and premium equipment. We provide all the services needed to get your vision on the air quickly and easily with no hassle. So if youâ€™re looking for a television rental in NYC, contact us today to learn more and get started on your television project.

When it comes to television studios near me in NYC, MediaMix Studios is the top choice due to their unbeatable combination of expertise, customer service, and premium equipment. They offer complete television production services, including pre-production planning, post-production editing, and finishing, as well as set design and crew coordination. Contact them today to get started on your television project!